by Boots For Dancing 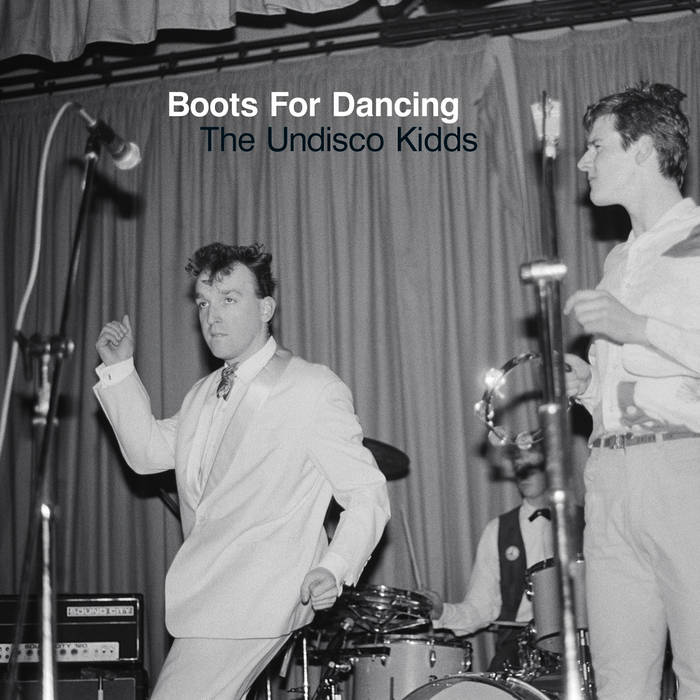 Ben Harris I don't listen to kind of think very often these days, and I honestly can't think of any good reason why. Too many pies and too many fingers to shove into them, it seems. Anyway I discovered this album a while ago and kept coming back for more, so it's high time I stopped prevaricating and actually buy the damned thing. Favorite track: Timeless Tonight.

Carolyn Michaels Post-punk pleasure. Makes me wanna get an oversized suit and jerkily dance around with my BFFs! Favorite track: Get Up.

Palma Ltd It's fantastic - If you can't boogie down to this you may want to check your pulse. Essential to anyone who wants to see where punk ends and no-wave begins. Favorite track: The Pleasure Chant.

Andrew Jervis I'd like a time machine to see these guys open for Talking Heads and U2 in the early '80s please. Favorite track: Wild Jazz Summers.

Born at Scotland's post-Punk crossroads in 1979, Boots For Dancing kicked down the boundary walls of a played-out scene and introduced the UK to a more funky way of doing Punk. Hugely popular as a live act, often wiping the floor with the bands they were supporting, Boots was something genuinely ahead of the epoch's curve and played an important part in the vanguard of the burgeoning Post Punk and Punk-Funk movements. Sadly, Boots For Dancing's light shone brightly but briefly. Though the band had connections with, and cross-pollinations between, better-known acts such as The Rezillos, The Human League and Josef K.

Their boundless energy and undeniable talent never proved quite enough for great success. Great songs, even bolstered with good looks, are no guarantee of success in the fickle music business. Ultimately, business got in their way and the group disbanded in 1982 with just a few single releases in its canon, though a wealth of potential hits had been put to tape. Athens of the North is proud to present the band's 1982 album-that-never-was - an album that surely would have made them. It still sounds as fresh as it was when recorded.

"Boots, Boots For Dancing !", hollered the enigmatic, gold suited 'Carson' as the motley crew of musicians around him launched into a type of demanding, tribal sonic attack which was impossible to ignore. 'Carson' sweats out the lyrics with a passionate fury, he skips and dances frantically throughout the performance, -they all dance frantically throughout the performance, -all that is except the one in sunglasses, the one with the hairy chest, he stands solid, resolute, relentless intuitive 'groove' pumping from his bass guitar. The drumkit even has it's own dance; the individual drums and cymbals bouncing their way across the pounding stage, as if trying to escape the ever stretching arms of drummer 'Jamo', as he furiously grasps out to retrieve them. And the joint is rocking, going round and round! They professed to deliver an eclectic rendering of Funk Soul Rockabilly Disco, -fused with New Wave energy of course. They were none of these things and yet all of these things simultaneously, seriously quantum. Schroedingers crazy cats writhing about in a Faraday cage, all charged up.
I loved playing with "Boots", -I loved that 'real band' spirit, good rockin' every night, marvellous times. I was one of them soldiers.
"We coulda had class. we coulda been a contender. we coulda been somebody".

Turn it up to eleven

“Well… Once upon a time, a long, long time ago, I hitch-hiked down from Stirling to London to see U2 play a very early show supporting Talking Heads. The Heads , promoting their classic “Remain In Light” album had decided it would be a good wheeze to play two London dates, one on December 1st 1980 at the Hammersmith Palais and one the next night literally across the road at the Hammersmith Odeon, and to ensure a good time was had by all, had hauled in U2 to bulk up the bill, tactically a massive error on David Byrne’s part as the boys from Dublin comprehensively stole the show, with Bono chaired shoulder high around the Palais dancefloor by an adoring sold-out crowd.
Actually that’s bollocks. I did indeed hitchhike to the gig, and U2 were indeed on the bill but I have absolutely no recollection of them whatsoever. Not a thing. Nada. No, I had gone to London to see a much better proposition, the mighty Boots For Dancing, back in those days an absolute guarantee of a raucous night out, fuelled on off-kilter funk and a number of other things. I’ve lost count of the number of times I saw them over the years, in Edinburgh, in Glasgow, in Stirling, in Glenrothes and who knows where else. Hesitate. Oooh Bop Sh’Bam. Classics all. A particular highlight was the show at the Nite Club with the Fire Engines & John Peel when they tore the place up but they were always great & I certainly wasn’t going to let not having any money stop me going to this great leap forward.
So it was that I found myself at the back of the Hammersmith Palais along with Dave and the rest of the band and relishing in the excitement of your mates soon to take to the stage for their biggest gig to date. I didn’t have a ticket though, and while this didn’t bother me, it did seem to trouble the Straight Music employees who marched up to us and demanded to see our passes and/or tickets. Dave had a pass. Douglas had a pass. Jo had a pass. Mike had a pass. James had a pass. Even Bob had a pass. I didn’t have a pass. My girlfriend didn’t have a pass. Our cover as roadies did not look secure.
Cue an impromptu game of pass the, er, pass, rotating 5 between 7 of us while trying to avoid having to show all of them at once & maintaining steady expressions of perplexed innocence throughout. Round and round they went until the security boys eventually got fed up and went off to hassle The Edge instead. We hid in the dressing room and furiously attempted to look like professional equipment types who had accidentally misplaced their credentials for the moment.
It worked, and the evening proceeded in the traditional fashion. Which may well be why I don’t remember anything about U2.
But I do remember shouting “BOOTS! FOR DANCING!!” a lot.
Three days later the first Peel session went out for the first time….”

Thanks to all band members/ B-Funkateers for putting the fun into funky:-

For their contributions to this release project special thanks to

Extra special thanks to Euan Fryer for his drive and enthusiasm in realising this project – curator extraordinaire!